Chapter 6 - the Letters to Ben Story

Sorry/not sorry...I had the best of intentions to get this Chapter posted earlier.  But I realized that the Canadian Women's Soccer Team was battling for the Olympic Gold and just had to watch!  So here we are...

Seeing Ben at the airport  both calmed me, and also reignited the feelings I had been trying to push down and talk myself out of.  The promise of seeing him again soon made it seem like more of a possibility too, even though we were still in the same situation as before.  I kept the days he thought he would likely be coming back through Calgary in my mind and continued on with my busy season.  The day I went to see him at the airport was Tuesday, November 20th.  My Christmas album was coming out on Tuesday, November 27th.

Though I was excited about my album, I was not managing the stress well.  I had taken on too much (classic Sara….) including playing piano at church just two days before my album release.  It had been months of hard work and pulling together a thousand tiny details to be ready.  I was having an album release concert that included a facility rental and everything that goes into organizing a big event, so needless to say I was spread pretty thin.

In addition to all that I had on my plate, my body was reacting to the added pressure by not cooperating with normal things like my menstrual cycle, which was normally like clockwork.  With every day that I was late I got more worried about my body, and what would happen if I got it the day of my album release.  I had always had brutal cramps and often had to miss school or work a day or two each month due to the unmanageable pain.  Getting up on stage and putting on a concert would be almost impossible if that should happen.

I got up on Sunday morning, two days before the album release and had my period.  The cramps were pretty brutal, but at that point I had no choice but to go play piano at church.  I had made a commitment and it would be extremely difficult to find someone to fill in at the last second like that.  Being the type of person to honour my commitments, I figured I would just power through somehow and then go home and crash.  We had two services and it was quite a long time at church, between arriving early for set up and sound check, playing both services, and then tearing down.  I made it through the first service feeling a little shaky but managing. The cramps intensified and the second service was much harder to get through.

As the keys player, I would get up at the end of the sermon and play softly as the pastor closed the service.  Then the rest of the band would come up and we would play one final song.  After the worship set at the beginning of the second service I was in extreme pain.  I found a dark little corner backstage and literally curled up on the floor, praying that the pain would subside before I had to get back up to play.  I'm sure if I had been able to think straight I could have had someone cover for me for that last little bit, but I was definitely not thinking straight.  I went out when it was time and just tried to make it through.  Mentally I was talking myself through the whole time.  “Just a few more minutes.  Ok, you should switch chords now.  Is it hot up here? Maybe I can take my sweater off….no, I don't think I can manage that. Ok, almost there, the band will be up soon. Almost time. Wait….is the room spinning???”

Next thing I knew, I was being carried off stage by two people and set down on the floor backstage with a crowd of concerned people around me.  I had passed out and fallen back, landing on my hip and then going all the way down.  I came to with someone checking my pulse and asking if they should call an ambulance.  Fortunately, my close friend Catherine was there and was able to get all the well-meaning but not very helpful people to back up and calm down.  Catherine and her husband Arthur helped to get me home safely and I tucked myself into bed for the rest of the day, still in quite a lot of pain and feeling pretty embarrassed.

I told Ben what had happened and he was quite concerned.  When I first told him, he said “see?  I have been telling you to slow down and take it easy!  This is your body’s way of saying that to you!” Over and over again he said I should be taking care of myself, getting more rest, and relaxing.  I knew he cared about me by the things he said.  He knew how hard I had been working and he was absolutely right...I did need to slow down.  That was just how he was, and as I have gotten to know other people from Ben’s circle they have confirmed that he was always very caring.

I don’t tend to do a great job of taking care of myself by cooking healthy meals.  So many times when we would talk he would scold me for not eating better and would say “you need a smack and a home-cooked meal!” And I would usually respond with something to the effect of “you can cook one for me any time!”.  We would talk about doing that one day and the time we would be able to spend together.  He would describe his favourite things to cook - rich, elaborate, amazing meals - and I would say how good it sounded and how I would probably gain 500 pounds if he was cooking for me.  We would laugh and he would make some comment about how a few extra pounds didn’t matter anyway.  It seemed like some distant, impossible dream, but it sure was nice to dream it together for a little while.

After my little “incident” at church I was bruised and sore from falling down, and still contending with pretty terrible cramps and other issues.  But time didn’t stop or slow down for me and before I knew it, it was the day of my second album release.  Fortunately I’d had the good sense to rearrange my work schedule so that I didn’t have to go teach that day.  There were many little details to be organized and things that needed to be taken to the venue, including my heavy piano (the very same one that Ben had helped me with a few months before).  With my body all out of whack I could barely lift it, but I managed to get everything in the car and ready to go.  Still feeling dreadful, nervous for the performance, and stressed about all the details of putting on this kind of event, the thought of seeing Ben later that week was a constant hope in my mind.

Though I wasn’t physically at my best, once the show started I felt great and things went well.  I got into the groove of performing...telling stories and singing my songs.  I like to do silly things while performing like take selfies from the stage so I had my phone up there with me.  That also enabled me to keep an eye on the time without being obvious and constantly glancing at my watch.  At some point during the show, I could see that my phone was ringing (it was set to silent, of course) and it was Ben.  I chuckled a little, not knowing why he would call when he knew what I was up to that night.  Once the show was done I spent some time mingling with my guests and then got started with all the cleaning up that needed to happen.  I had seen that Ben had texted after I didn't answer his call.  He asked me to call him when I had the chance. 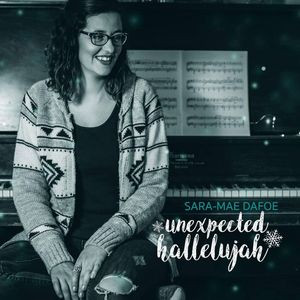 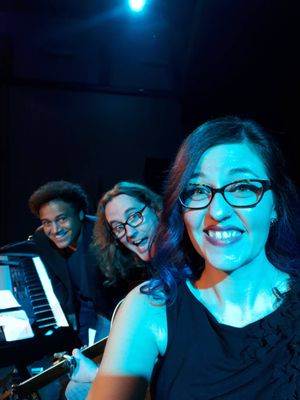 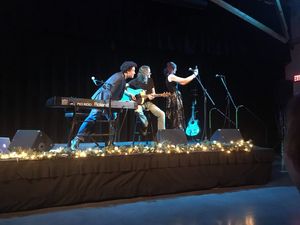 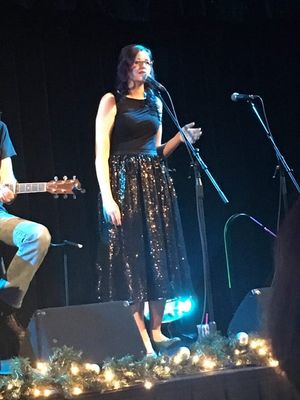 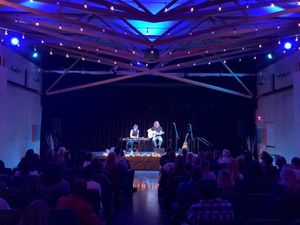 Once everything was loaded up between my car and my friend Catherine’s (she had helped me plan and pull off the event), I called Ben sitting in my car in the back alley behind the venue.  I couldn’t wait until I got home and didn’t want to call while driving.  It was getting pretty late and I didn’t know where he was at or if he would be sleeping.  He answered right away but I could tell from the sound of his voice on the other end that he was in the car.  Something had happened and he had left Ontario earlier than planned.  He also told me that his plan had changed and he would no longer be driving through Calgary.  I didn’t quite understand what had happened.

My heart just sank when he told me that.  Since seeing him one week before, I had been thinking about spending more time with him and letting myself get excited.  It was a strange mixture of emotions that day...the stress and pressure before my concert, the performance high and pride in pulling something like that off, and then the heartbreak of finding out that this thing I had been counting on would no longer happen.