Chapter 9 - the Letters to Ben Story

I am so immensely grateful for the love and compassion I have received since last week's post.  It was a very difficult chapter to share.  I hope you will continue to read along with me...the story is not over yet!  Please be sure to catch up on the previous chapters before reading on!

My tears came quickly and poured down my face.  It was unbelievable.  It couldn’t be.  There had to be some mistake.  Some misunderstanding.  I couldn’t accept it.  I couldn’t wrap my head around it.  How could he just be…...dead?  Gone?  I instantly thought of the vast hole, the emptiness that there was now in the world because he wasn’t here anymore, and because there could never be anyone like him to fill that space.

I was no stranger to loss.  No stranger to grief.  I had experienced the deaths of many loved ones at many different stages in my life.  I had dealt with the loss of all my beloved Grandparents, other relatives, and even had to deal with the death of two young students that I had taught.  I had navigated the end of a marriage and all the crushing grief that accompanies such a thing.  This was somehow entirely different.

I sat in my car, around the corner from the studio and cried and cried and cried until I could hardly breathe.  I cried so hard I nearly threw up.  I couldn’t stop.  I had at least a 45 minute drive to get home in rush hour traffic and on one of the busiest roads in my city.  Normally I wouldn’t give such a drive a thought other than mild annoyance at the timing.  Now I felt trapped and incapable of operating my vehicle.  How could I focus when I had just learned that Ben had died doing the very same thing?  How could I trust myself?  How could I trust everyone else on the road?

I texted my best friend Tiffany.  I don’t remember how the words came out.  I only remember her response.  I would drive home and she would come over and be with me.  I made it about halfway.  The traffic was pretty bad and I needed a break so I pulled off the main road into a shopping area and found myself stumbling around the grocery store.  I don’t remember the thought process that made me feel that was necessary right at that moment, but that’s what I did.  Once I bought a few random grocery items and made it back home, Tiffany arrived and I completely crumbled.

She did exactly what I needed in that moment.  She was there.  When people are shocked and confused and completely overtaken with grief, often we just need someone to be present, to come alongside.  There are no magic words that take the pain away or bring the person we have lost back to us.  Even when people are well meaning, I tend to find such attempts more annoying than helpful.  The only appropriate response is “I am here with you in your pain”, and that is exactly what Tiffany said, both in word and action.

The next few weeks were a blur and a strange mixture of emotions.  I was completely shocked and devastated.  I felt the loss of Ben so deeply, in a way that I couldn’t even articulate.  He and I had never actually been romantically involved, not “officially” (whatever that means) and aside from my closest girlfriends, I hadn’t really admitted to anyone how deeply I felt for him.  I had never experienced that kind of connection with anyone, ever.  I knew that I had loved him, but I don’t think I had ever said it out loud.  I didn’t know how to tell people around me how devastating this loss was for me in a way that would make sense and I wasn’t ready or willing to tell the whole story as I am now.

Probably the most confusing part was that I was still dating the guy I had been set up with.  At this point we had been seeing each other for just over a month.  I had never told him about Ben before the accident.  He was away for that whole week when I got the news, and we were just exchanging a few texts each day.  The next morning, depleted from all the crying and wishing it had all been a bad dream, I texted and told him that I got some very bad news the previous evening.  I believe what I said was that a friend had been killed in an accident.  I didn’t go into details.  He called me right away and was very caring.  I didn’t know what to say.  Would it have been appropriate to tell him that I had been in love with this man and that I had wished so desperately that we could have had a future together?  I didn’t think so, and so I didn’t say any of that.  If I had felt comfortable being open and honest about how I had felt, I think I may have grieved differently from the start.

The guy and I had planned a little summer road trip somewhat spontaneously.  I was nervous about it for a number of reasons, including wondering if it was too soon to go on a trip together (spoiler alert: IT WAS), having general travel anxiety already, and then the grief and trying to come to terms with Ben being gone.  I decided to go, and felt a mixture of excitement and fear in the days leading up to the trip.  I hadn’t really opened up to this guy very much about what I was feeling regarding Ben’s death, but I had been quite open with him about my anxiety.

We had decided to go to a city about a 14 hour drive away and enjoy some of the tourist attractions.  I didn't sleep for a few nights before we were going to leave and was feeling pretty terrible.  Over the course of the trip I struggled with sleeplessness, nausea, headaches, and stomach issues.  I figured it was due to the anxiety and felt so terrible for ruining what could have been a nice trip.  He was very understanding and we did manage to have some fun. 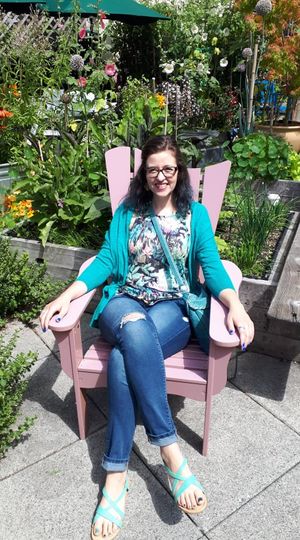 After those few days, we started the long drive home.  I had the worst anxiety attack of my life in the car.  It was completely uncontrollable.  I could feel it starting and spiralling out of control, and try as I might I could not talk myself out of it.  Before I knew it I was having hot flashes, waves of nausea, dizziness, heart pounding, heavy breathing bordering on hyperventilating, and I could not stop crying.  He was freaked out and concerned and I couldn’t answer him when he asked what I needed.  I didn’t know what I needed.  I felt trapped in the car and desperate to be home but we were 13 hours away.  It was awful.

He found an exit (after being locked in heavy traffic for a while) and a place to pull off the road.  Somehow I managed to calm down at least a little and the drive continued.  It was painfully awkward and all my fears of being rejected and abandoned swam around uncontrollably in my mind.  We barely spoke at all, making for a very long day.  When we finally got back to my house in the early hours of the morning I crashed pretty hard, and awoke the next day feeling not very rested and filled with dread.

There is no way of knowing if the road trip was to blame for us breaking up or not.  I believe that it exposed issues that would have arisen one way or another.  A couple days after returning from the trip, a difficult conversation turned into the relationship ending.  Though it was difficult to process at the time, I am glad it happened at that early point in the relationship.  It would have been worse had we continued on and invested more time only to have the same thing happen.  This was just a few weeks after Ben’s death and I was a mess.